at the Blessing of the Pets.

You are very welcome to this service. Thanks for bringing your owners with you. I hope you enjoy being here with other animals, and you don’t find that Labrador too big, or that cat too smelly!

There’s a wild story about Saint Francis of Assisi, preaching and birds. Today we mark St Francis’ day, technically on October 4, and this saint, who lived 800 years ago, has a large part in our hearts. We like him partly because he seemed to have a special rapport with you animals.

The story starts with Saint Francis preaching. Saint Francis had a beautiful voice. In fact, one of the brothers, who used to be known for his elegant, resonant beautiful speaking voice, thought he was the best speaker in Italy, until he heard Saint Francis and was so spell-bound he joined the Brothers.

But on this occasion Francis was having trouble. A group a swallows was making a racket. ‘Little Sisters,’ St Francis said, ‘no-one can hear the words of the Gospel because of your noise. Please be quiet until I have finished my sermon.’ And they were. And so were the people. They were so moved that they wanted to follow him, leave their town, and become wandering preachers like him.

‘Don’t be in a hurry,’ St Francis, ‘and don’t leave, and I’ll arrange everything for your life with God.’ So St Francis set up the Third Order, which consists of Christians who want St Francis as their guide in Christian living, but who, unlike the Brothers, live in their own homes and get married. This Third Order still exists. My wife Rae and I are members of it.

But after this sermon, St Francis set out on the road again. He saw ahead of him a vast throng of birds. There were thousands of birds, maybe tens of thousands, more than you could count, maybe more that you could make with computer graphics. In any case Francis was impressed with such a mob of birds.

He told his companions to stop while he went ahead to preach, this time to the birds. He told this huge crowd of birds how much God loved them, because God had created them. He told them how thankful they should be for being able to fly and for being well insulated with two or three layers of feathers. They also should thank God for the air to fly in, and for the fact that they didn’t need crops to live. ‘You don’t sow or reap, and God feeds you and gives you the rivers and springs to drink, and trees and high mountains to make safe nests.’

The birds then opened their beaks and stretched their necks and reverently bent their heads to the ground. Their singing and movement showed St Francis how much they’d understood.

St Francis then made the sign of the Cross and let them leave. They followed the Cross Francis had signed. Some went to the north, some to the south, others to the west, the rest to the east. They sang magnificent songs, marvellous songs, as they flew off.

The birds set an example to us, to live according to the Cross of Christ, and to go in every direction, thanking God that we depend only on him, like the birds, trusting God to provide enough for each day, and singing our beautiful song, the song that tells the story of Jesus.

Our beautiful song is our song, our own song. There’s a legend about an African tribe that 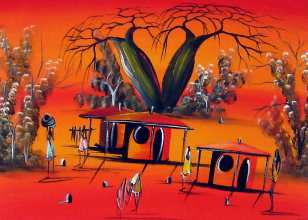 says a pregnant woman listens to the child in the womb and learns a song that is unique to that child. She teaches the father-to-be the song, then she teaches the midwives who sing it as the child is born. As the child grows up, each time the child falls and hurts herself, the village gathers around and sings her song. When she does something wrong as an adult, she is brought face to face with those she has wronged, the villagers form a circle around her and sing her song. The song is sung at the person’s funeral, and then is never heard again.

Our own song: one that our loved ones sing when we need healing or restoring. Wouldn’t it be wonderful?

The song each bird sang as it flew in one of the directions of the Cross was its own individual song. At the same time, each song fitted in with the songs of all the other birds. It was in close harmony with the song of the community.

In the same way, our own song with its individual story of God with us, with each of us, harmonises with the song of the community with its story of Jesus who came among us to share love.

So when we sing ‘All Creatures of our God and King’, we are singing the song that was originally St Francis’ own song. It’s now the community’s song, and we sing it along with the whole community. But we also make it our song. We remember the times we have been awed by the night sky and we sing,

‘Thou silver moon with softer gleam, O praise him. …

Thou rising moon, in praise rejoice,

Ye lights of evening, find a voice. O praise him.’

When we get to,

‘And all those of tender heart,

we can remember a time in particular when we forgave another, or when we were forgiven even though we were filled with shame and remorse.

I’m now going to make the sign of the Cross over you, and your owners can watch. When you leave, at the end of the service, you can go in the direction of the Cross that is your path, thanking God for God’s provision for you, and continue loving and forgiving your humans. As you go, go singing your wonderful song.

+  As you go to the north, or to the south, or to the west, or to the east, do not be guilty of the sin of ingratitude, but travel with God’s love and with your song. Amen.

One thought on “Christian bird song?”