The main facts are listed below:

o Born in London in 1844 to loving parents, the eldest of seven siblings.
o His father was in a lucrative marine insurance business.
o Baptised at St John-the-Evangelist in Horsham.
o Studied classics at Oxford.
o As an undergraduate, decided to follow John Henry Newman (and others), and to “go over” to Rome: a ‘perversion’ in the eyes of his family.
o Decided to follow Newman into the Society of Jesus.
o His friendship with the poet Robert Bridges only just weathered his conversion to Rome. They discussed the craft of poetry (and their poems) until Hopkins’ death.
o Jesuit novitiate at Roehampton in Wales, which Hopkins loved. During this time he did Ignatius’ Spiritual Exercises for the first time. 1868-70.
o Studied for the Jesuit priesthood at Stonyhurst 1870-73.
o Parish work and teaching – the Jesuits refuse to allow him to take final vows for two years. Hard to know what to do with this strange priest.
o Sent to Ireland with a mission of founding a Catholic University. Reality of marking every Irish child’s matriculation exams in Latin and Greek. Very lonely and depressed.
o Dies in 1889. On the day of his death, the priest looking after him walked past his room and on several occasions heard Hopkins whispering, “I am so happy.”
o Bridges publishes The Poems of Gerard Manley Hopkins in 1913. 750 copies printed, and it takes 12 years to sell them. Now a first edition might cost $15,000.

In Ireland, Hopkins writes To Seem the Stranger Lies My Lot 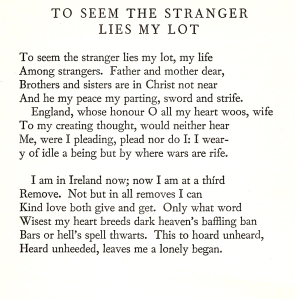