I’ve been reading two new and extraordinary Australian novels: Richard Flanagan’s Narrow Road to the Deep North and Tom Keneally’s Shame and the Captives. Both deal with the Second World War.

My brother and I were born just after the War. He remarked recently how much the men we had grown up with had been marked by that war. We grew up on a farm, and we saw farmers who spent their time drinking not farming; our nearest neighbours lived with their grandparents, but they turned out to be paternal grandmother and maternal grandfather who shared their house. On a remote farm, one farmer loyally cared for ‘Mad Jack’. Today this eccentric would be recognised as an untreated sufferer of Post-Traumatic Stress Disorder.

The novels by Flanagan and Keneally take us to events that damaged many Australian men: the Burma railway and the Cowra break-out.  Both novels, though explicitly fiction, describe the events fully, but exploit what novels do best: they humanise the characters. Both novelists are unusually ambitious. Flanagan’s main character Dorrigo Evans is a doctor who ends up as Officer Commanding the prisoners building the Thai-Burma railway. This is dangerous ground. Australians have made ‘Weary’ Dunlop into a hero and this character is too like the legend of ‘Weary’. But Dorrie Evans believes he is no hero. He is a man just managing to hold himself together in the extreme conditions.

Flanagan shifts the time backwards and forwards between the doctor’s pre-war infatuation with his uncle’s young wife, and his serial womanising after the war. His one real act of heroism may be some years after the war when he saves his society wife and children from a Tasmania bushfire.  But on his death-bed, he has a kind of vision of his heroism on the railway. He remembers when the Japanese guards force him to select 200 men to march to another camp. The men are sick and dying, and he must make selections knowing that he is sending the men to a certain death, others he is saving. Yet he moves through the parade, putting his hand affectionately on the shoulder and naming each man chosen. He gets up early next morning, feeling the heavy responsibility for his choices. In his dream, each man comes up to him, shakes his hand or salutes him with a cheery ‘Thank you, Sir,’ or ‘All the best to you.’ Somehow the little he does, even the mistakes he makes, are seen as heroism, and Flanagan shows us how hollow he feels, almost as though he is a fake, or has been mistaken for someone else.

I was gripped by Flanagan’s depiction of loyalty between ordinary men. Just trying to stay alive in a hellish world, they both helped each other and sometimes failed to help each other. The profound cruelty inflicted on these men created something of beauty, a tiny bloom in the dark jungle. We all know and feel the barrier to giving this bond of mateship its real name. Flanagan dares once in the novel to call it love. The novel also acknowledges how the hardships also ravaged Australian men in ways that their children who are Flanagan’s generation – my generation – are only beginning to understand.

For Richard Flanagan, behind unexpressed emotions the laconic Australian male hides a vulnerability, and many are not only vulnerable but fragile too.

Our emotions are unexplored territory, and Tom Keneally, from an earlier generation, knows that our lack of familiarity with the world of emotions makes it difficult for us to explore the emotional lives of others. The Italians and the Japanese in the POW camp at Gawell, the fictional palimpsest for the real Cowra, provide Keneally with contrasting case studies.

I was surprised to learn that most of the detainees were not internees but were prisoners of war. The Italians and the Japanese were kept in separate compounds and had very different attitudes to being captured: the Italians were on the whole relieved. Their allegiance to Mussolini was not deep, and in any case Italy was about to fall to the allies. The Japanese seethed with resentment both towards themselves and their captors. Their ambition as warriors had been to kill or be killed in the service of the Emperor. To be so weak as to be captured was shameful, and they bore their shame with difficulty.

The Japanese despised the Australians for looking after the camp according to the Geneva Convention. This compassion was weakness. They refused to cooperate and found little ways to make life difficult for their captors.

The Italians by contrast were happy to work on Australian farms, to attend Mass with Australian families and to reach out for human contact. We follow Giancarlo, or “Johnny”, the work-release prisoner on the farm of a widower and his daughter-in-law. An affair develops between the two, leading to confusion in the novel’s climax when Tengan is re-captured on their farm after the “break-out”.

Keneally shows us the emotional deafness of career Colonel Abecare and his subordinate Major Suttor, whose main interest was writing a popular radio serial, both to their own feelings and to the cultural-based emotions of their prisoners. The shame of Japanese warrior Tengan and his hatred for his enemy is well-drawn. On the other hand, the contempt of the Koreans for their Japanese superiors is hidden from the Australians. They saw the warrior mentality and loyalty to the Emperor as dangerous and meaningless.

The killings and suicides in the break-out shock the Australians who are not prepared for such extreme expression of emotion. Abecare, the old English soldier, is slaughtered, and the Australians are left to muddle through. And the novelist continues to hint at a kind of cultural autism, an inability in Australian men to read the emotions of others, because they cannot read or articulate their own. 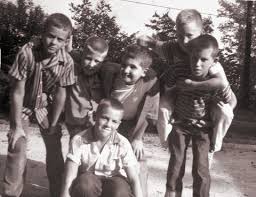 My brother is right. We accepted that generation of damaged men just as eccentrics. It has taken a life-time to begin to understand their impact on us and to learn to love and hate, and fear and enjoy, to be angry and disgusted, and to know that these emotions are the essence of life.

One thought on “Novel Readings of Australian Men’s Emotions”