This is a moment in history when we should stop treating people just as expedient labour and build a more just and caring community. 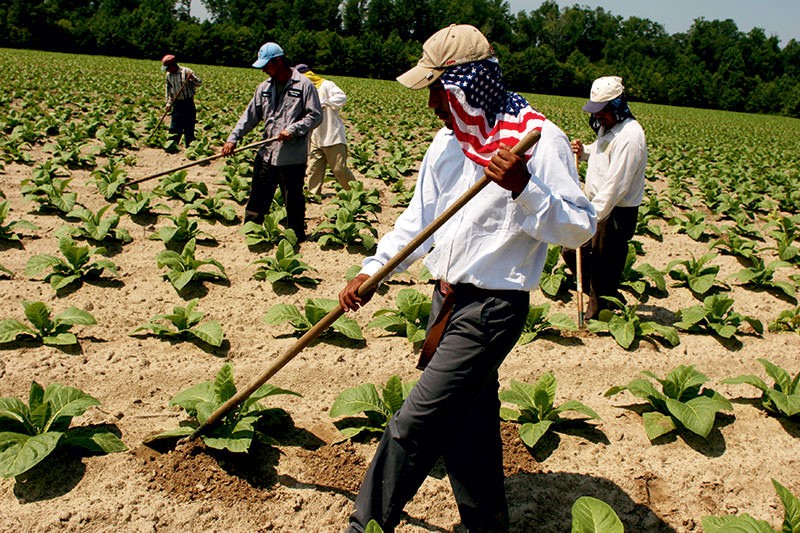 For me to really get it, I had to be taken at 6 a.m. to the Post Office in Durham, North Carolina. The sun was up, and the day was already hot and humid. On the Post Office steps groups of men, about 30 in total, stood around, waiting. My guide said, ‘These are undocumented Mexicans. Some people joke that they are people who don’t exist.’

Eventually a farm pick-up truck drove by, pointed to two or three of the men, ‘You! You! You!’ and the men who were beckoned scrambled onto the back of the truck. Some minutes later, another truck arrived, and the same procedure followed. The rest of the men waited, waited. At about 7:30 a.m., the street began to wake up as workers on their way to air-conditioned offices glared at the men. It was time to disperse. Those remaining were unlucky that day.

These men were all desperate to feed themselves and their families. The picked workers would be given cash, $15 or $20, at the end of a ten-hour shift in the oppressive humidity of summer. This was day labour, southern U.S. style. I imagine that, 30 years on from then, day labour is still employed in much the same way.

The men were treated, not as human beings with needs, but as what they were worth to the employers. They were exploited.

Jesus tells the story of an employer who goes back again and again throughout the day to the Post Office steps, employing as many workers as he can, and then insisting on paying them according to their need, not his economic advantage. No wonder he encountered resistance – from the workers who had ‘borne the burden of the day and the scorching heat’ (Matthew 20:12b), and most probably from other employers too.

This employer’s actions seem revolutionary. What he had done was to defy the economic realities which ignore the dignity of human beings. He treated the workers with worth and generosity.

Today’s news reminds us that Covid-19 has made many more people vulnerable, looking for a little work just to survive. Let us bear them in prayer and offer a practical hand to them when we can.

We also note that there are executives who ‘earn’ annual salaries of millions of dollars. These amounts cannot equate to value for work done, nor do they relate to people’s needs. Our economic system is currently not producing a fair society.

Eventually the world will get through this pandemic. Let us ask our leaders to re-build a world where people are not grudgingly de-valued, but where every person is treated with worth and generosity. We should encourage the Government to continue and expand programs like JobKeeper and JobSeeker. We should invite politicians to seriously look at new ways of caring for every member of society like, for example, Universal Basic Income schemes.

This is a moment in history when we should stop treating people just as expedient labour and build a more just and caring community.